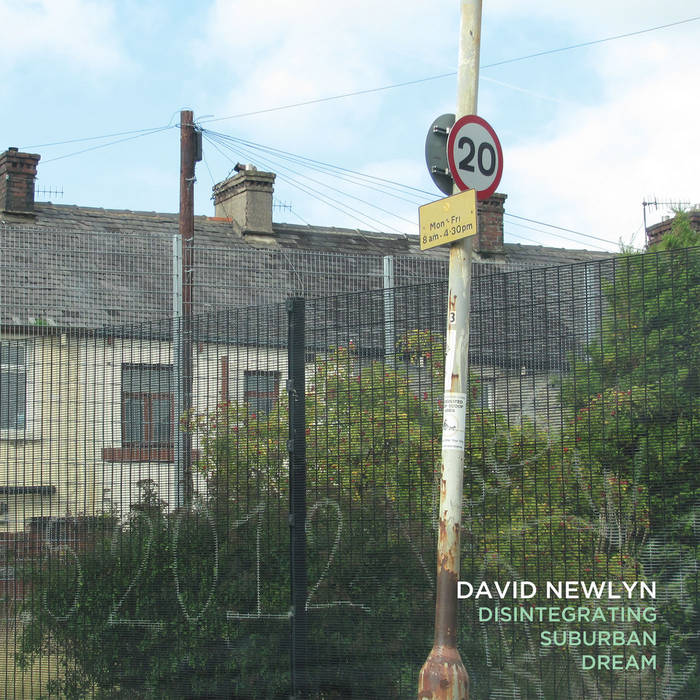 Vital Weekly : It's been a while since I last heard something by David Newlyn, whose earlier releases where reviewed in Vital Weekly 5457, 600 and 730). His earliest works was dealing with rhythm, more than it does now, but somewhere along the lines he moved into a more abstract ambient sound, using field recordings, keyboards, computers, guitar and fretless bass. Brian Eno is perhaps a name that is used a lot when it comes to comparing music - and perhaps only (?) because we expect Eno to be a household name - but listening to the twelve pieces on 'Disintegrating Suburban Dream', ranging from a mere minute to six minutes, it struck me that many of the pieces have a nice musical touch to them. This is not the very abstract variation of ambient, in which x-amount plug-ins are used to create amorphous soundscapes, but rather with its emphasis on piano sounds, guitar and lush keyboard textures, the music gets just very musical, like Eno did on 'On Land' for instance. It paints watercolour pictures of places, maybe deserted suburban places, but no less: clear pictures. Beautifully slow evolving music. While I was playing this, I was thinking: how would Erik Satie compose music if he would be alive today? My guess would be that it's probably something as close to David Newlyn on this album. I was out of touch with his music for some time, but now it's time to catch up, I think. Great atmospheric tunes, which offer not much news; just in case you were looking for that. www.vitalweekly.net/927.html

Fluid Radio : With numerous releases on labels such as Cotton Goods, Time Released Sound, Tokyo Droning and Flaming Pines Uses under his belt, David Newlyn is no stranger to the ambient scene. His latest offering, Disintegrating Suburban Dream on ambient faves Hibernate, uses more acoustic instruments than his previous work and is certainly effective in doing so. Using the grainy nature of phone or camera sound recordings to create twelve studies of derelict and abandoned places, Newlyn has combined these field recordings with acoustic and electronic instruments to create twelve effective studies of decaying spaces.

We start with the short but sweet ‘Longer Days’ which sets the tone of the album with a disjointed violin murmuring quietly beneath bubbling field recordings, dream pop like guitar and gentle piano chords. Newlyn conveys a feeling of loss throughout the album with tracks such as the touching ‘Feeling No Remorse Must Be A Blessing’, with its soft, pulse like beat and gentle piano interspersed with a sparse melodic line. The ghostly, Satie-esque piano of pieces such as ‘Rule of Thirds’ and ‘No Rest In The Silence’ also provide gently unsettling impressions of places once familiar, now left eerie and abandoned.

‘Nowhere To Go’ brings with it a more melancholic edge, the piano this time is fragmented in its melodic ideas and accompanied by skittering whirrs and static. Distant tones gradually creep in, taking us into ‘(Possibly) Subsequent Disorientation’ where the listener is immersed in a more static soundscape. Fragments of voices, radio signals and static clicks flicker through the darkness before grainy piano and guitar chords appear, clearing the fog that has so suddenly engulfed us.

As is often the case with decaying buildings and towns there is a constant coupling of the melancholy of memories lost and feelings of hope for things to come, and this runs throughout the album. Newlyn’s use of jittery field recordings and slightly dissonant chords gradually transformed into something full of optimism through slight tonal changes keeps listeners on their toes, reinforcing the idea of fragility and potential imminent collapse.

Bandcamp Daily  your guide to the world of Bandcamp

cktrl talks about heartbreak and his new record 'Robyn'